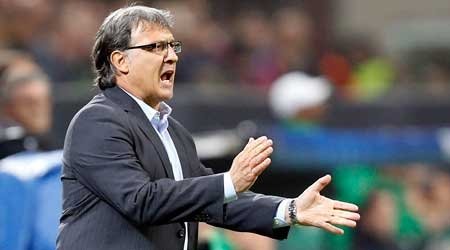 MADRID (Reuters) – Barcelona sought to silence any alarm bells ringing ahead of Saturday’s La Liga ‘Clasico’ at home to Real Madrid after they stuttered to a draw in their Champions League game at AC Milan on Tuesday.

Barca needed a Lionel Messi equaliser to rescue a point in the 1-1 Group H stalemate at the San Siro and despite hogging possession in customary fashion again looked short on ideas in attack following a frustrating 0-0 draw at Osasuna on Saturday.

Real, who host Milan’s Serie A rivals Juventus in Champions League Group B later on Wednesday, are third in La Liga, three points behind their arch rivals, and a win at the Nou Camp would put them level with Barca on 25 points from 10 games.

Barca are still unbeaten this season and top both La Liga and their group in Europe’s elite club competition but have consistently struggled against defence-minded opponents even with the firepower of Argentine World Player of the Year Messi and Brazil forward Neymar in their arsenal.

Coach Gerardo Martino, who like compatriot Messi hails from the city of Rosario, dismissed concerns about his team’s form at his post-match press conference in Milan.

“I have no doubts about the team’s ability to perform,” he told reporters.

“I would have liked to beat Osasuna and Milan but we’re doing well and we’re still growing,” added the 50-year-old, who took over from the ailing Tito Vilanova in the close season.

Milan took the game to Barca in the early stages and were rewarded when a defensive blunder allowed playmaker Kaka to set up fellow Brazilian Robinho, both of whom used to play for Real, to score the opening goal in the ninth minute.

Barca’s leveller came in the 23rd minute after they won possession in central midfield, Andres Iniesta fed Messi on the right and he cut inside into the penalty area before clipping the ball past Milan goalkeeper Marco Amelia.

“Against teams that close themselves off at the back it’s easier to score when you recover possession rather than making short passes which gives your opponent time to reorganise,” Martino said.

“It’s a good point but we deserved more. We only lacked intensity in the first 15 minutes and our punishment was too severe.”

Captain Xavi echoed his coach’s frustrations and insisted the team were “in good shape” ahead of the ‘Clasico’, which will be the 167th league meeting between the Spanish giants, the world’s richest clubs by income.

“It’s a shame because we created the chances to win the game,” the Spain playmaker said.

“With the exception of the first 15 minutes, when we conceded a goal, we dominated and we created chances to score. We’re in good shape coming into the Clasico.”

Real hold the upper hand in league games against Barca, with 70 victories to 64 since they first locked horns in 1929.

Under Jose Mourinho last term, Real drew 2-2 at the Nou Camp and won 2-1 at the Bernabeu but surrendered their Spanish title to Barca largely thanks to an erratic start to the campaign.