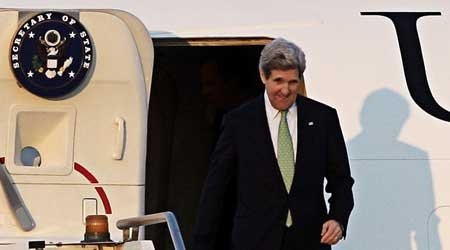 ROME (Reuters) – Secretary of State John Kerry promised on Wednesday that U.S. authorities would look into whether their intelligence services may have illegally intercepted Italian telecoms data, an Italian government source said.

“The question was brought up to verify reports about possible violations of privacy rules,” a source in the Italian prime minister’s office said following the meeting. “We encountered a cooperative attitude and were assured that the U.S. administration has put the issue under review.”

No comment was immediately available from the U.S. delegation.

The French government has called for the issue to be put on the agenda of the next European Union summit this week in Brussels. French daily Le Monde reported this week that the U.S. National Security Agency had conducted mass surveillance of French citizens.

“Italians must have clarity on this issue,” Interior Minister Angelino Alfano said on Wednesday in Rome. Italians must know and be told if they were spied on “without being intimidated by anyone”, he said.

Italy’s main privacy watchdog has written to Letta to request that the government look into whether Italy may also have been targeted by U.S. surveillance programmes.

The director of the U.S. National Security Agency, Army General Keith Alexander, has vigorously defended the NSA’s activities as lawful and necessary to detect and disrupt terrorist plots.