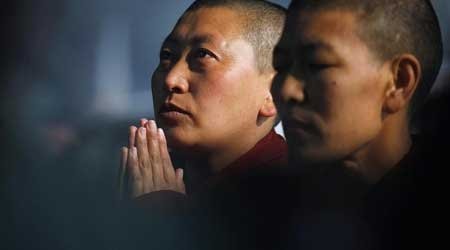 BEIJING (Reuters) – China has no intention of altering its “correct” policies in the restive region of Tibet as they have brought unprecedented achievements, a government white paper said on Tuesday, slamming the romanticised notion Tibet was once an idyllic fairyland.

China has long defended its iron-fisted rule in remote and mountainous Tibet, saying the region suffered from dire poverty, brutal exploitation of serfs and economic stagnation until 1950, when Communist troops “peacefully liberated” Tibet and introduced “democratic reforms” in 1959.

When President Xi Jinping took office earlier this year there had been expectations in some quarters he may take a softer line on Tibet, partly because his late father, a reformist vice premier, had a close bond with the Dalai Lama.

But Xi has shown no sign of changing course in Tibet.

In a lengthy policy paper carried by the official Xinhua news agency, the government said that Tibet under Chinese rule had achieved a great deal.

“Today’s Tibet is developing economically, making progress politically, has a flourishing culture, a harmonious society and a good environment; its people are happy and healthy,” it said.

“Tibet’s development cannot be separated from this correct path,” the white paper added.

Tensions in China’s Tibetan regions are at their highest in years after a spate of self-immolation protests by Tibetans, which have led to an intensified security crackdown.


More than 120 Tibetans have set themselves alight since 2009, mainly in heavily ethnic Tibetan areas of Sichuan, Gansu and Qinghai provinces rather than in what China terms the Tibet Autonomous Region. Most have died.

The white paper rejected the criticism, saying that “any fair-minded person would be filled with amazement” at the advancements China has bought to Tibet.

“There are some others in the world who intentionally distort the past and present of Tibet due to their ideological bias or out of consideration for their self interests. They created a ‘Shangri-La’ myth, wishing to keep Tibet in a backward primitive state forever,” the white paper added.

It repeated China’s assertion that exiled Tibetan spiritual leader the Dalai Lama is intent on pushing for Tibet’s independence to sabotage its development and stability.

The Dalai Lama, who fled China in 1959 after an abortive uprising against Chinese rule, is considered a violent separatist by Beijing. The India-based Dalai Lama says he is merely seeking greater autonomy for his Himalayan homeland.