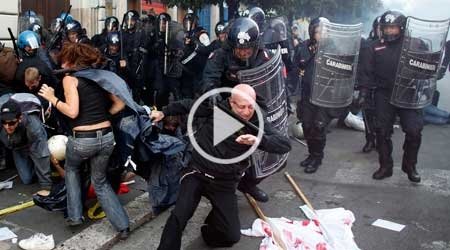 ROME (Reuters) – Demonstrators clashed with Italian police on Saturday as tens of thousands marched through Rome to protest against unemployment, government cuts and big construction projects they say take money away from social services.

Hooded protesters turned over garbage bins in front of the Economy Ministry and set several of them on fire. Using sticks and clubs, they attacked police in riot gear. The police charged and chased demonstrators up side streets.

The hooded demonstrators, who infiltrated a mostly peaceful protest, threw smoke bombs, eggs and bottles at the ministry and broke the window of a nearby bank. Police said 15 of the most violent protesters were arrested and two policemen were injured.

In another area along the demonstration route, police defused a large firework with a bullet inside, which they said could have caused serious damage had it gone off.

Protesters also set off smoke bombs and fireworks along the route and many planned to camp out during the night in front of the Infrastructure Ministry, the end of the demonstration.

The protest comes as Prime Minister Enrico Letta is trying to hold together his shaky left-right coalition government and struggling to lead Italy out of its worst post-war recession.

Letta’s 2014 budget, unveiled on Tuesday, has become a focal point of discontent, with unions complaining about freezes on public sector salaries and what they say is an insufficient easing of the tax burden on workers. Youth unemployment is at an all time high at 40.1 percent.

Organisers said at least 70,000 people joined the march that started in Piazza San Giovanni on the south side of the city and snaked its way through the city. Many shops along the route were closed as a precaution.

The mostly young demonstrators held up banners against unemployment, lack of affordable housing and the planned TAV high-speed train link to France.

Opponents of the project say that as well as environmental concerns, the money to build the high-speech train should be used to help the poor and unemployed.

“This protest is to demand basic rights: a job paying a wage, and housing,” said Matteo, a 20-year-old student from the eastern Marche region, who declined to give his surname.

“All the most downtrodden people are here to protest, unemployed people, students, immigrants, workers without job security,” he said.

Immigrants seeking asylum also joined the demonstration, holding banners reading “Lampedusa”, the island where many migrants land after crossing the Mediterranean Sea from north Africa. Nearly 400 have died at sea this month alone.

At least 4,000 police were on duty. They said they had confiscated teargas canisters and rocks from some of the demonstrators’ backpacks.

They also said they found rocks and chains hidden behind bushes along the route of the demonstration.

Police said 14 people, several from anarchist movements, had been detained at the border with France and suspected of planning to disrupt the demonstration with violence.