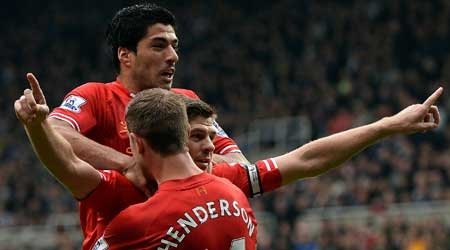 LONDON (Reuters) – Arsenal played with the style, pace and confidence of their glory days under Arsene Wenger to crush Norwich City 4-1 to underline their title credentials at the Emirates Stadium on Saturday.

The Gunners, without a trophy since 2005, gave their fans renewed hope that that famine could end this season with Jack Wilshere and substitute Aaron Ramsey scoring outstanding goals with the other two coming from club record signing Mesut Ozil.

The win lifted Arsenal, temporarily knocked off top spot after Liverpool had played earlier in the day, back to the summit of the Premier League with 19 points from eight matches, two points clear of Chelsea.

“But we scored a fantastic first goal and the goals after that were absolutely amazing. We took advantage of Norwich getting tired in the last 20 minutes in a very clinical way. But they made it difficult for us.”

Chelsea, who came from behind to beat Cardiff City 4-1 moved on to 17 points and into second place, above Liverpool on goal difference.

Chelsea, who started the day in third place, fell behind at Stamford Bridge after some woeful defending by David Luiz who allowed Jordan Mutch to score after 10 minutes.

Luiz’s mistake meant that Petr Cech, making his 300th Premier League appearance, could not mark the occasion with a clean sheet, but that was a minor irritation as Chelsea bagged all three points.

Eden Hazard equalised in the 33rd minute after Samuel Eto’o nipped in to steal the ball from goalkeeper David Marshall as he was bouncing it up and down. Eto’o, Oscar and Hazard put the issue beyond doubt with goals in the second half.

Liverpool led the table for a brief spell after their early kick off, but they slipped to third following their 2-2 draw at Newcastle United with skipper Steven Gerrard scoring his 100th league goal from a penalty.

Newcastle played for the whole of the second half with 10 men after French defender Mapou Yanga-Mbiwa was sent off shortly before halftime. Although they trailed twice, Liverpool dominated the depleted home side and deserved more than a point.

Newcastle went ahead with a stunning 25-metre strike from Yohan Cabaye but Gerrard equalised from the spot after Yanga-Mbiwa was sent off for hauling down Luis Suarez.

Newcastle defender Paul Dummett was brought on to shore up the defence after the Frenchman walked, but he was at the other end to score with a volley at the far post to put Newcastle ahead in the 57th minute with his first goal for the club on his second league appearance.

Daniel Sturridge equalised with a header 17 minutes from time, the 126th goal in this fixture, a record tally between any two sides in the Premier League era.