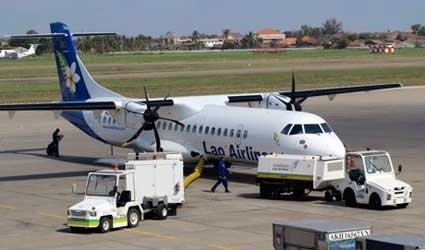 BANGKOK (Reuters) – A Lao Airlines plane crashed into the Mekong river in southern Laos on Wednesday, according to an airline official, in an accident Thai television channels said killed 39 people.

A Lao Airlines official said the plane had crashed at about 4 p.m. (0900) near Pakse, Champasak province, which is on the borders of both Thailand and Cambodia.

Thai television showed a photograph of the ATR 72 turboprop plane partly submerged in shallow water on a stretch of the Mekong, the tail severed. Another television channel showed what appeared to be several bodies on the bank of the river.

“We do not yet know the number of casualties, our executives are currently in a meeting and will provide more details in the morning,” the airline official said by telephone.

Thai media said 39 people were killed, among them two Thai nationals. It did not give the source of the information.

Lao Airlines is the national carrier of the communist state and has operated since 1976. Its aircraft carried 658,000 passengers last year and it has a fleet of just 14 planes, mostly propeller-driven.

It operates on seven domestic routes and has international flights to China, Cambodia, Thailand, Vietnam and Singapore.