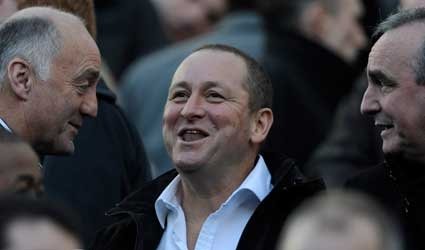 “Mike is a strong character who has been a success in his whole business life and is a genius in that world – but when you come to football, the logic doesn’t quite fit,” he said in an interview on Sky television.

“He loves football but he sometimes can’t understand how it works and it confuses and upsets him, and when he is upset, he does things that aren’t brilliant for the football club.

“That’s just Mike and he has funded the club, made sure we have no debt – other than to himself – and supported me, but unless we get a billionaire from deepest Russia we are probably not going to be able to compete with the likes of Man United, Man City and Chelsea, which is what our fans want.”

Media-shy Ashley, who made his fortune through his sports goods empire, has upset fans on a number of occasions since taking over the club in 2007.

Most recently he appointed former manager Joe Kinnear as director of football, a move that saw only one player – loan signing Loic Remy – arrive at St James’ Park in the last transfer window.

“We were after flair players and when you get into that market as a Premier League club, you have your league and divisions like the Bundesliga chasing them because they are a rare commodity, so it is difficult to get them over the line,” Pardew said.

“Loic Remy has been a great signing and given us what we didn’t have last year which is a striker who can play, build the game and finish, while he has a nice manner, is comfortable with our group and has the confidence to play for Newcastle, too.