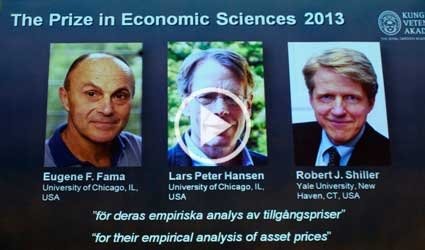 STOCKHOLM (Reuters) – Three American scientists won the 2013 economics Nobel prize on Monday for research that has improved the forecasting of asset prices in the long term and helped the emergence of index funds in stock markets, the award-giving body said.

“There is no way to predict the price of stocks and bonds over the next few days or weeks,” The Royal Swedish Academy of Sciences said in awarding the 8 million crown ($1.25 million) prize to Eugene Fama, Lars Peter Hansen and Robert Shiller.

“But it is quite possible to foresee the broad course of these prices over longer periods, such as the next three to five years. These findings … were made and analyzed by this year’s Laureates,” the academy said.

The behavior of asset prices are key to decisions such as savings, house buying and national economic policy, the academy said.

“Mispricing of assets may contribute to financial crises and, as the recent global recession illustrates, such crises can damage the overall economy,” it added.

The economics prize, officially called the Sveriges Riksbank Prize in Economic Sciences in Memory of Alfred Nobel, was established in 1968. It was not part of the original group of awards set out in dynamite tycoon Nobel’s 1895 will.