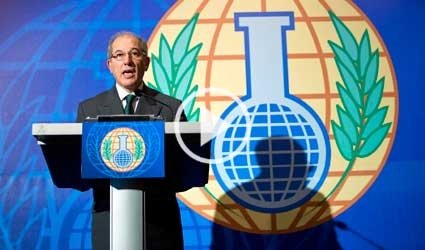 OSLO (Reuters) – The Organisation for the Prohibition of Chemical Weapons (OPCW), which is overseeing the destruction’s of Syria’s arsenal, won the Nobel Peace Prize on Friday, the Norwegian Nobel Committee said.

Experts from the Hague-based global chemical weapons watchdog, supported by the United Nations, are working to destroy Syria’s massive chemical weapons stockpile after a sarin gas strike in the suburbs of Damascus killed more than 1,400 people in August.

The $1.25 million prize will be presented in Oslo on December 10, the anniversary of the death of Swedish industrialist Alfred Nobel, who founded the awards in his 1895 will.

Norwegian public broadcaster NRK, which has a strong track record leaking the names of winners, reported the OPCW’s victory more than an hour before the official announcement.