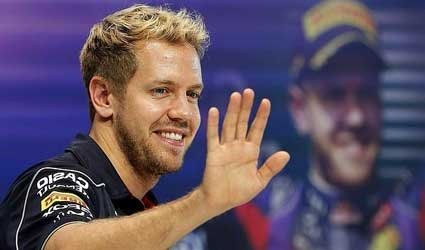 SUZUKA, Japan (Reuters) – Formula One world champion Sebastian Vettel has rejected comparisons between his current dominance with Red Bull and the days when Ferrari and Michael Schumacher had the sport in a stranglehold.

Vettel, who can win his fourth title in a row at the Japanese Grand Prix on Sunday, has won the last four races after taking three pole positions in a row.

In Singapore last month, the 26-year-old German was some two seconds a lap quicker than his rivals.

Such a dominant display prompted Mercedes’s Lewis Hamilton to suggest after last weekend’s Korean Grand Prix that Vettel’s success was sending some fans in Europe, who got up early to watch the Asian races, back to bed because they already knew who was going to win.

Hamilton later clarified his comments by hailing Vettel as a “great champion”.

“Well, that’s a compliment,” Vettel, who was once nicknamed ‘Baby Schumi’, told reporters at Suzuka on Thursday after being told of the comparison to his compatriot and seven times champion.

However, he said Singapore was “a bit of an exception” and the Red Bull was nowhere near as dominant as the Ferrari had been when Schumacher won five titles in a row between 2000 and 2004.

“If you take Korea, which I think is more similar to Spa, the gap was something between three and six seconds for the whole race,” said Vettel.

“Don’t get me wrong, it’s a nice cushion to have in the car…but equally you know that if you make one stupid mistake…three seconds is nothing compared to 30 or 60.”

Vettel will win the title at Suzuka, where he took his second crown in 2011, with four races to spare if he wins the race and Ferrari’s Fernando Alonso fails to finish in the top eight.

Although the Spaniard – 77 points adrift of the German – has finished in the top eight in all but one race this year, he retired in Japan last season while Vettel won.

“The drivers championship is nearly impossible so we will try to enjoy the races, try to attack all the time and fight for the constructors’ championship,” said Alonso, who beat Schumacher to championships in 2005 and 2006 when with Renault.

Vettel, he said, had a clear advantage in car performance over Ferrari.

“Sometimes you have the car to do it, sometimes not,” the Spaniard told reporters. “At the moment Red Bull and Vettel are a very good combination and too good for us.”