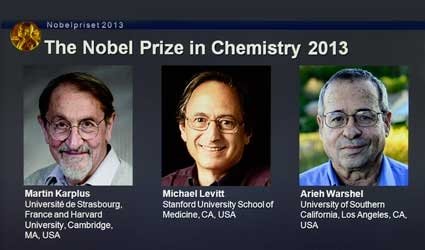 “Today the computer is just as important a tool for chemists as the test tube,” the academy said in a statement. “Computer models mirroring real life have become crucial for most advances made in chemistry today.

In drug design, for example, researchers can now use computers to calculate how an experimental medicine will react with a particular target protein in the body by working out the interplay of atoms. Today, all pharmaceutical companies have sections dedicated to predicting by computer modelling how a drug molecule will interact with the body.

But the approach also has applications in industrial processes, such as the design of solar cells or catalysts used in cars. For the former, programs can be used to mimic the process of photosynthesis by which green leaves absorb sunlight and produce oxygen.