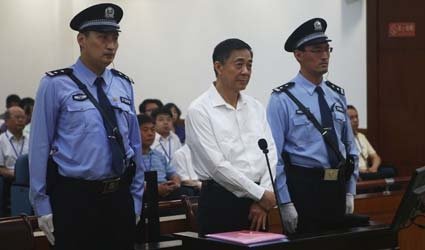 BEIJING (Reuters) – A court in eastern China on Wednesday allowed ousted former senior politician Bo Xilai to appeal against a life sentence handed out last month on crimes of corruption and abuse of power.

Bo was a rising star in China’s leadership circles and cultivated a loyal following through his charisma and populist, quasi-Maoist policies, especially among those left out in the cold by China’s anything-for-growth economic policies.

But his career was stopped short last year by a murder scandal in which his wife, Gu Kailai, was convicted of poisoning a British businessman, Neil Heywood, who had been a family friend.

In a brief statement posted on its website, the high court in the eastern province of Shandong, where Bo was first tried, said it had allowed him to appeal. It gave no other details, and did not say when the appeal would be heard.

While Bo has the right to appeal, his sentence is unlikely to be overturned as the courts are controlled by the ruling Communist Party which long ago pronounced him guilty.

The appeal should technically be heard within two months.