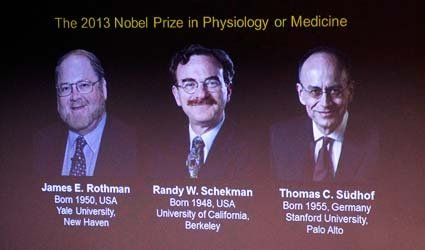 STOCKHOLM (Reuters) – Americans James Rothman and Randy Schekman and Germany’s Thomas Suedhof won the 2013 Nobel medicine prize for their work on how hormones are transported within and outside cells, giving insight into diseases such as diabetes and Alzheimer’s.

The Nobel Committee said the work of the three scientists had great implications for neurological conditions as well as conditions affecting key organs.

“Without this wonderfully precise organisation, the cell would lapse into chaos,” the Nobel Assembly at Sweden’s Karolinska Institute said in a statement when awarding the prize of 8 million crowns $1.2 million (746.5 thousand pounds).

“Through their discoveries, Rothman, Schekman and Suedhof have revealed the exquisitely precise control system for the transport and delivery of cellular cargo,” the committee said.

For example, their research sheds light on how insulin is manufactured and released into the blood at the right place at the right time, the Nobel committee said in the statement.

Medicine is the first of the Nobel prizes awarded each year. Prizes for achievements in science, literature and peace were first awarded in 1901 in accordance with the will of dynamite inventor and businessman Alfred Nobel.

“These beautiful discoveries have importance for the understanding of the human body and obviously implications for diseases in various organs such as the nervous system, diabetes and immune disorders,” Jan-Inge Henter, professor of clinical child oncology at the Karolinska Institute, said at a news conference.

Their work centred on the ‘vesicle’ system by which cells take up nutrients, move substances around and release chemicals like hormones and growth factors.

“There are many organs where this is important,” said Henter.

“For quite some time, it’s been known that this is important in the signalling between neurons, that is nerve cells. We have billions of nerve cells and they have to communicate with each other and they do so with this vesicle transport system.”

“Now, we’ve realized that this is also important in for instance diabetes, because we know that insulin is released by these vesicles and we know that the immune system is regulated also by this vesicle transport mechanism.”

Watch: Gang of men spit at Jewish teens in “anti-Semitic” attack in London