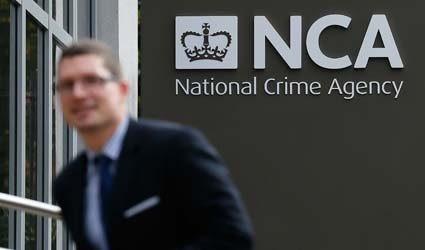 The National Crime Agency, dubbed Britain’s version of the U.S. Federal Bureau of Investigation (FBI) by media, will consist of more than 4,000 officers and will take on many of the duties of its widely criticised predecessor, the Serious Organised Crime Agency (SOCA), while also having additional powers.

“There will be no one beyond the reach of law enforcement or beyond the reach of the NCA,” Bristow told reporters at a briefing ahead of the agency’s launch. “Those people involved in the most horrible activities can expect the most comprehensive and robust responses.”

The NCA will have the first national intelligence hub, a national unit to tackle cyber crime, and will take the lead in coordinating the police response to cross-border drugs gangs, complex international fraud, and online child sex abusers.

The agency estimates there are some 37,000 individuals spread across 5,500 groups involved in organised crime in Britain, with the annual cost of fraud from such gangs amounting to almost 9 billion pounds.

Unlike the FBI, however, the NCA will not be involved in national security or counter-terrorism, although that might change in the future once it is established.

Prime Minister David Cameron’s government decided to replace the SOCA shortly after coming to power in 2010.

Bristow said he wanted to establish a different relationship with the private sector to better understand areas of crime such as fraud that remain under-reported and under-recorded.

“Banks, for instance, are aware of fraud … and for a variety of reasons may or may nor report that to law enforcement,” said Bristow, a former police chief constable based in central England.

“There’s a good example of where we need to work differently with the banks.”