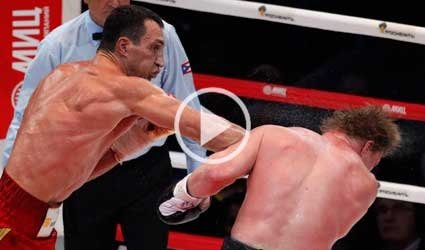 The 37-year-old Ukrainian, who took his record to 61 wins and three defeats, knocked Povetkin down four times on the way to retaining his WBA, IBO, IBF and WBO crowns.

“Alexander is a fighter and it was hard for him because I hurt him. But he stuck in there because he has a big heart,” said Vladimir in a ringside interview.

“I wanted to finish it earlier. I wanted to land that one big punch and I think I could have done better.”

With 14,000 fans firing up the Russian, Klitschko stuck to his tried and tested game plan by chipping away at his opponent’s defense with a relentless series of left jabs.

Standing 10 centimeters taller than the challenger and with a longer reach, the Ukrainian floored the 34-year-old with a wicked left hook in the second round.

Povetkin, who had never been knocked down and was undefeated in his 26 previous fights, went down three more times in round seven but somehow managed to survive the onslaught.

Apart from the occasional big right, the bruised Povetkin had little to offer going forward.

“I will train harder and become stronger,” he said. “Sometimes it did not work what I wanted to do. I put everything in out there.

“I never give up. I fight until the very end. Klitschko was stronger, he is the best in the world at the moment.”