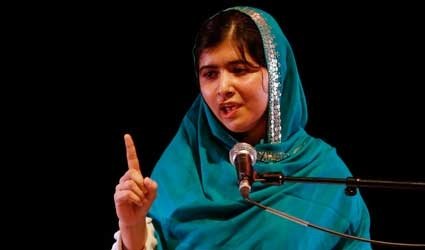 STOCKHOLM (Reuters) – A Pakistani teenage activist shot by the Taliban and a Japanese author who writes about alienation and a fractured modern world are tipped as Nobel Prize winners ahead of the annual awards that start on Monday.

Malala Yousafzai, 16, shot in the head by the Taliban last year for demanding education for girls, gave a speech at the United Nations in July saying she would not bow to “terrorists” who thought they could silence her. She is a favourite for the peace prize among experts and betting agencies.

“I have Malala Yousafzai on top,” Kristian Berg Harpviken, director of Oslo-based peace research institute PRIO, told reporters. “The EU (European Union) got the prize last year and the EU prize was poorly understood and fundamentally questioned in many quarters.”

One obstacle could be her age. Tawakkol Karman, a Yemeni human rights activist and youngest winner to date, was 32 when she received the prize and some experts argue the prize would overburden such a young woman. Yousafzai is living in London and still facing Taliban threats.

Murakami is very popular in Japan, but has also become well known abroad for his works which deal with isolation and love and bring the surreal into everyday life.

His first novel, Hear the Wind Sing, was published in 1979, but Murakami first leaped to literary stardom in 1987 with Norwegian Wood, a bleak coming-of-age story dominated by grief and loss and named after a Beatles song.

Since then, his works, including Sputnik Sweetheart, Kafka on the Shore and 1Q84 – which sold one million copies in the first month in 2009 – have all been bestsellers.

His works veer between the surreal and the mundane, often featuring characters isolated from the world, either metaphorically because of loneliness or mental illness or physically existing in a parallel reality.

Accolades in Stockholm will go also to medicine, physics, chemistry and economics. Oslo will name the peace prize winner on Friday.