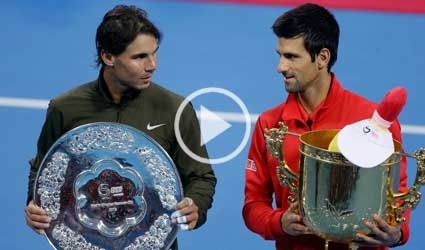 (Reuters) – Novak Djokovic won his fourth China Open title in five years on Sunday, prevailing 6-3 6-4 in the final against Rafael Nadal who will replace him as the men’s new world number one on Monday.

The Serb continued his love affair in Beijing, improving his tournament record to 19-0 after brushing aside Nadal in an hour and 27 minutes to halt his run of three defeats against the Spaniard.

Nadal had to reach the final in the tournament to displace Djokovic from the top ranking and the issue was put to rest on Saturday when Tomas Berdych retired with a back injury in his semi-final against the Spaniard.

The 26-year-old Djokovic stamped his authority on the title match early, racing to a 3-0 lead in the first set and never allowing the Spaniard, who went into the match unbeaten on hard courts this year, to stage a comeback.

He broke Nadal in the first game of the second set and clearly looked the better player, hitting winners almost at will.

Such was the Serb’s domination that the 27-year-old Nadal, who boosted his grand slam singles tally to 13 this year by winning the French and U.S. Opens, failed to create a single break point opportunity in the whole match.