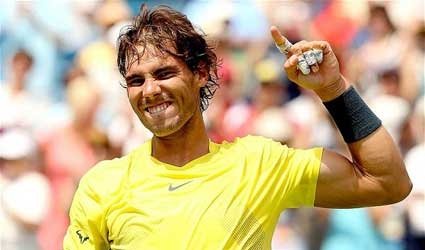 Reuters) – Rafa Nadal will return to the top of the men’s world rankings after Tomas Berdych retired with a back injury during their China Open semi-final on Saturday.

Serb Novak Djokovic, who will lose top spot when the new rankings are announced on Monday, will meet Frenchman Richard Gasquet in the second semi-final.

Berdych, trailing 2-4 in the opening set, tweaked his back while running for a backhand slice and needed a medical time out.

He did return to the court but after a few points decided he could no longer continue, handing the 27-year-old Spaniard an easy passage to Sunday’s title round.

Nadal, who boosted his grand slam singles tally to 13 this year by winning the French and U.S. Opens, has not been ranked number one since July 2011 but has produced a stunning run since returning from a long injury lay-off in February.

“(This is) a great year, one of the best years of my career without any doubt,” Nadal told reporters. “(It) sure is special be back to the top position of the rankings after more than a half year without playing tennis.

“At the end, it’s just a number… What (makes) me happy is (everything) I did to be back where I am today.”

He has lost two finals since his return, winning 10 tournaments and adding over $10 million in prize money in 2013.

The semi-final victory extended Nadal’s winning run to 21 matches and another win on Sunday will give him his first China Open title since 2005.

“(It) will be a great finish (to) the season if I am able to finish the season (at) the No. 1 spot,” the Spaniard added. “For that, I am sure I need to win more matches if I want to be there.”