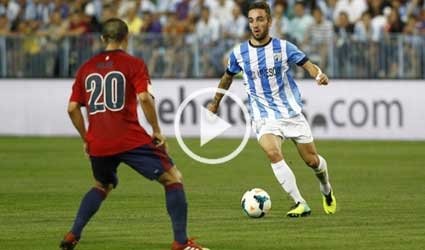 Atletico Osasuna defeated Malaga CF tonight at La Rosaleda by 0-1 thanks to a first half goal by Oriol Riera. Bernd Schuster’s men were unable to equalise in the second half, despite a strong attacking display. Following four tough matches, the Blue and Whites now have time to recover during next week’s League break.

The match started with a setback for the Blue and Whites.  Little more than a minute after kick off, Oriol Riera made his way through the midfield Malaga defence to launch a powerful shot at goal, however a fast reaction from Willy prevented an early shocker for the local side.  This was the first sign that Osasuna could provide a real challenge for Bernd Schuster’s men.

It wasn’t until the 6th minute that Malaga CF had a clear shot at goal.  Following an impressive display by Portillo, the El Palo-born player set up a good ball for Morales, but the ball went too far to the right of Ángel’s goal.

Osasuna’s attitude on the pitch during the first part of the match surprised the ‘Malaguistas’ somewhat.  The visitors controlled the rhythm of the match and took the reigns right from kick off.  Following two very near misses from Osasuna, Duda came close to opening the scoring in minute 18, as he gained possession from a left corner clearance, but he sent the ball over the crossbar.

The best opportunity for Schuster’s team came in the 21st minute.  Antunes made his way to the goal line to launch a promising ball that hit the near post.  Santa Cruz regained possession for the Blue and Whites, but was stopped in his tracks by Ángel Fernández.  Portillo came close to glory seconds later, but again the Osasuna keeper won the battle.

It was the visitors that were about to turn the match around.  Oriol Riera took control of the ball from the left wing, and tried his luck at goal, but was unable to get past Willy.  However he took advantage of the rebound and this time was right on target, to put Osasuna in the lead by 0-1.

Javier García’s men weren’t about to stop there.  Excellent play from De Las Cuevas to the left of the goal area led to another great save from Willy.  Sisi took control on the rebound and the visitors were granted a corner kick.  Osasuna played some of their best football at this stage of the game.

In minute 32 it was Osasuna again that looked set to score a second goal.  Armenteros passed to Marc Beltran, but Caballero stopped the Navarra-based team from increasing their lead to 0-2.

Certainly not for the lack of trying, but Malaga CF struggled to find an equaliser against a determined rival who was moving further and further back on the pitch.  The Blue and Whites couldn’t gain control of play, and at the half-time whistle were 0-1 down.

Schuster made some changes to attempt to strengthen the attack in the second half.  El Hamdaoui and Pawlowski joined the game, and the Blue and Whites returned with a strong determination to turn the match around from the very first minute of the second half.

Backed by tremendous support from the crowd at La Rosaleda, the ‘Malaguistas’ really stepped up their attack and put on a much more intense performance, despite not really creating any real chances to score.  In minute 57, a pass from Antunes led to a chance for Roque Santa Cruz, but the ball sailed over the crossbar.  Again in minute 65, El Hamdaoui set up a good ball for Santa Cruz, that provided little problem for goalkeeper, Fernández.  In the 71st minute, Angeleri gained control in midfield, passed to Gamez who sent the ball to Roque, who passed back to Angeleri, but the Osasuna defence put paid to the chance of an equaliser.  Seconds later, El Hamdaoui came close to a goal, against an Osasuna who appeared to be more concerned with wasting time in order to defend their 0-1 lead.

Despite great intentions, and five minutes of extra time, Schuster’s men couldn’t get a goal tonight.  The Blue and Whites suffered their first defeat in four matches, just before next week’s League break.