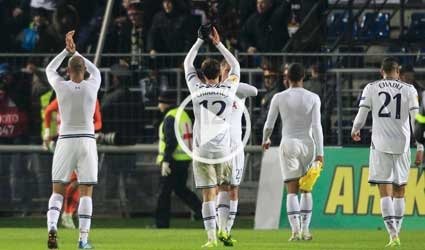 London (Reuters) – Tottenham Hotspur exposed the weaknesses in Anzhi Makhachkala’s star-shorn squad, winning 2-0 in Moscow to maintain their perfect start in the second round of Europa League group stage matches on Thursday.

Jermain Defoe and Nacer Chadli scored first-half goals for the visitors who cruised through the Group K clash against the Russian side whose once-impressive lineup has been depleted by a recent clearout.

Sergio Floccari inspired a stunning late fightback for Lazio to draw 3-3 against Trabzonspor as Eintracht Frankfurt, Ruban Kazan, Sevilla and Fiorentina joined Racing Genk, Swansea City, Ludogorets and Salzburg in getting two wins from two games in their respective groups.

Valencia shrugged off the scars of their opening defeat by Swansea to secure three vital points in Russia with a 2-0 win at Kuban Krasnodar and Olympique Lyon were held to a 1-1 home draw by Portuguese side Vitoria Guimaraes.

PSV Eindhoven, who also suffered a surprise loss in their first match, recovered with a 2-0 win over Ukrainian side Chernomorets Odessa and stoppage-time goals rescued draws for PAOK Salonika and Rapid Vienna.