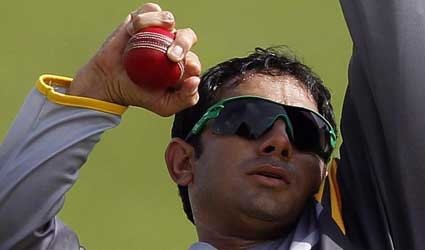 LAHORE (Reuters) – Pakistan spinner Saeed Ajmal has had to apologise to the national team’s coach Dav Whatmore over seemingly innocuous remarks the player made in a television interview about having a foreign-born coach.

Ajmal said there were some language difficulties to overcome, but also praised former local coaches Waqar Younis and Mohsin Khan, which prompted Whatmore to use his Twitter feed to say he had been ‘deeply upset and hurt’ by the comments.

The Pakistan Cricket Board moved quickly to defuse any controversy and issued a statement that said they had advised Ajmal to meet Whatmore and apologise for his comments.

“I immediately went up to Dav and apologised and explained the context and circumstances in which I made certain remarks,” Ajmal said in the statement after he met the Australian.

“Dav has worked tirelessly with the Pakistan team and it would be extremely unfair not to recognise his services.

“I enjoy very good relations with Dav and am hopeful of continuing this in the coming series.”