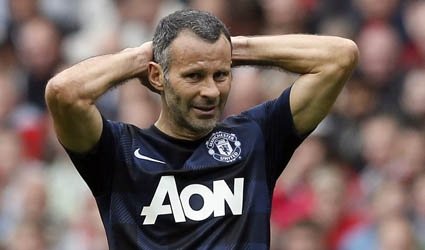 (Reuters) – Manchester United’s poor start to the season has left the club reeling and new boss David Moyes under scrutiny but Ryan Giggs will offer a reassuring presence when he reports for Champions League duty in Ukraine this week.

The 39-year-old Welshman trained at the club’s Carrington training ground on Tuesday before boarding yet another plane to yet another European city.

Should Moyes turn to the evergreen midfielder on Wednesday against Shakhtar Donetsk, Giggs will register a record 145th appearance in Europe’s premier competition (including qualifiers), moving him ahead of former Real Madrid striker Raul in the appearance list.

Giggs, who won 13 Premier League titles and two Champions Leagues under former manager Alex Ferguson, is now part of Moyes’s coaching staff but has plenty to offer on the pitch.

“Really? Wow. I didn’t know that,” was Giggs’s reaction in an interview on the club’s website when told of the milestone.

“It’s a great competition and I’ve been lucky enough to win it twice and play a lot of memorable matches.

“There have been so many great players to have graced the tournament and Raul is up there as one of the very best – he has a great goalscoring record and he’s won it three times.”

“If I do pass him it will be a great source of pride for me,” added Giggs, United’s record appearance maker.

The records have piled up for Giggs down the years and with five appearances for United this season it is not inconceivable that he could reach 1,000 club games.

“I just can’t believe he’s nearly 40. In my playing days everyone just assumed you were finished when you reached 30, but there he is, still going strong,” said United great Bobby Charlton, whose appearance record Giggs memorably surpassed in United’s Champions League final win against Chelsea in 2008.

“As well as being a great player, Ryan is a terrific talker too, and that part of his game will be important now that he’s part of the coaching staff.