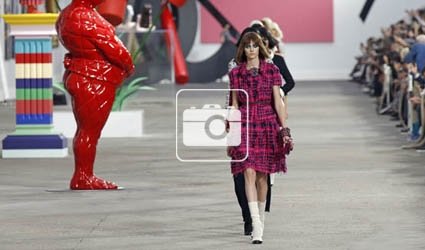 PARIS (Reuters) – If art imitates life, then life is an oversized quilted Chanel purse mounted on a wall – at least for some.

That was the impression made on Tuesday at Chanel’s Spring/Summer 2014 Paris ready-to-wear show, where the runway was decked out as an art gallery filled with contemporary art installations featuring the luxury brand’s products and logo.

Oversized bottles of Chanel No. 5 under Plexiglas, huge canvasses bearing the ubiquitous double C logo and the iconic purse with gold chain strap provided a visual crash course in Chanel’s enduring consumer appeal and the sense of humour of its artistic director, Karl Lagerfeld.

Left unexplained was the naked male mannequin on all fours supporting a tire on his back that was adorned with the Chanel logo.

Lagerfeld – who turned 80 earlier this month and has spent three decades at Chanel’s helm – did not leave all the art on the walls, however.

As Jay Z belted out “I just want a Picasso in my … castle” on a soundtrack that shook the bleacher seats, Lagerfeld sent nearly 90 outfits down the runway, one of Paris Fashion Week’s most ambitious presentations from the privately-held company.

In bright hues of raspberry, navy, bubble-gum pink and black and white, Lagerfeld played with new takes on the classic Chanel silhouette.

Built-in capes and panels that opened at the thigh imparted a contemporary feel to belted jackets and ladylike skirts, while off-centre necklines or cut-outs on sleeves revealed a hint of unexpected shoulder on otherwise demure looks.


Most revealing and avant-garde in their simplicity were simple panels of fabric that shielded the front torso but were affixed in the back with only a string of pearls.

But Lagerfeld departed from the classic Chanel book with a series of kaleidoscopic print dresses inspired by brushstrokes.

While the brash multi-coloured palette may give some Chanel fans pause, the dresses’ intricate pleating, strips of fabric that fluttered as the models moved and petal-like ruffles were delicate works of … art.

“Part of the world is depressing but there is also part of the world where people are pretty happy,” he said, then offered a style tip tinged with a dose of pop psychology.