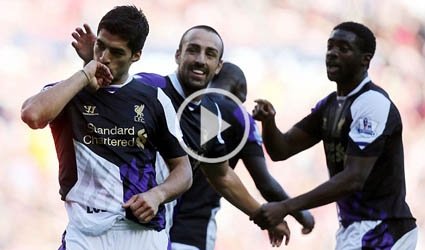 (Reuters) – Luis Suarez marked his return to Premier League action with two goals to help Liverpool to a 3-1 win at managerless Sunderland that lifted them to second in the table on Sunday.

The Uruguay striker, who returned from a 10-match ban for biting in the midweek League Cup loss at Manchester United, was making his first league appearance since being suspended for biting Chelsea’s Branislav Ivanovic in April.

He scored Liverpool’s second in the 36th minute after Daniel Sturridge had opened their account eight minutes earlier with a controversial goal that went in off his upper arm after he had risen to try to head in a corner.

Sunderland, bottom of the table with one point, got themselves back into the game early in the second half when Emanuele Giaccherini pounced after keeper Simon Mignolet failed to deal with Ki Sung-yeung’s long-range effort.

Suarez had to wait until the 89th minute for his second goal and it was Sturridge again who set him up for a simple finish that sealed Liverpool’s fourth league victory of the season.

The win put them on 13 points from six games, ahead of Tottenham Hotspur on goal difference and two points behind leaders Arsenal.

“On the back of a really tough game where we played well during the week (against United), today was always going to be a really physically demanding game for us,” Liverpool manager Brendan Rodgers told Sky Sports.

“I thought the work we put in today was exceptional. To get the three goals and a few more chances to score, I thought we were really dangerous on the counter-attack. As a team we worked really, really hard.”

Sunderland, who sacked Paolo Di Canio last Sunday after a string of poor results and media reports of dressing-room unrest, started brightly and Seb Larsson hit the bar with a 24th-minute free kick.

Despite an apparent improvement in both performance and spirits under their caretaker manager and former club captain Kevin Ball, the sign that it was not going to be their day came four minutes later.

Sturridge’s fifth league goal of the season will draw plenty of complaints from Sunderland even if none of their players protested at the time when the England international converted Steven Gerrard’s corner with his arm.

“I’ve obviously tried to head it but I guess my heading is not good enough, is it?” Sturridge said.

“I’ve missed the ball, it’s gone in off my arm but I wouldn’t do that on purpose. Sometimes these things happen.”

There could be no argument over Liverpool’s second goal as Gerrard’s superb long pass picked out Sturridge on the right and the striker burst into the area to put a perfectly weighted ball across the goal for Suarez to tap in.

Sunderland were fired up in the second half and they finally got on the scoresheet through Giaccherini’s quick thinking after Mignolet could only push Ki’s shot straight to him.

The hosts nearly drew level moments later when Craig Gardner’s shot from range forced Mignolet into a superb save and they continued to press hard.

Liverpool had chances to put the game out of reach but it took until a minute from time for them to re-establish their two-goal advantage.

It was the result of a quick counter-attacking move following a Sunderland corner with Mignolet throwing the ball to Suarez, who ran forward before finding Sturridge on the left and the Englishman put the ball across goal for Suarez to finish.

Sunderland, still without a win this season, chose to see the positives in their performance with Ball saying the scoreline had flattered their visitors.

“Today we saw a real hard-working, committed performance but I also think there was a lot of good football in there as well, I think we need to take heart from that,” he told Sky Sports.

“I’d like to think it bodes well for the future.”

The visitors made their dominance count in the 34th minute when Howson’s low, right-footed shot beat diving keeper Asmir Begovic, who should have done better, to give Norwich their first away win of the league season.

Stoke were unlucky to have a penalty appeal turned down early in the second half when Kenwyne Jones went down after being tugged by Leroy Fer, who gave a refreshingly honest account of his actions.

“Yeah, I pulled his shirt…just a little bit,” the Norwich midfielder said after victory lifted his team to 14th place, level with Stoke on seven points from six matches.