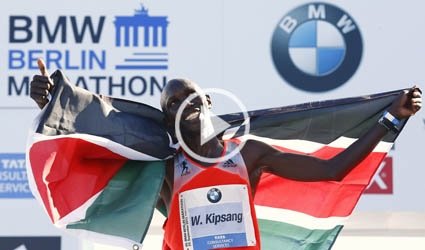 (Reuters) – Kenyan Wilson Kipsang made the most of the notoriously flat and fast Berlin streets to smash the marathon world record by 15 seconds en route to taking the title on Sunday.

The 31-year-old Kipsang clocked a time of two hours, three minutes and 23 seconds to better the previous mark set two years ago in the same race by compatriot Patrick Makau, who was forced to pull out through injury two weeks ago.

Kipsang, who won the 2012 London Marathon and also took bronze at the Olympics, produced a storming finish to leave compatriot Eliud Kipchoge a distant second almost a minute behind.

“I’m very happy that I have won and broken the world record,” Kipsang said in a televised interview after the race.

“I was really inspired by Paul Tergat when he broke the world record here 10 years ago and I’m very happy that I was in a position to break the record on the same course.”

Kenyan Tergat’s time of 2:04:55 at the 2003 Berlin Marathon was the first to be ratified as a world record by governing body the IAAF, who previously recognised fastest marathon times as world bests.

Makau’s mark had looked safe as the leading bunch dropped more than 20 seconds off the pace after 30 kilometres but they clawed back the deficit over the next five kilometres.

With the group whittled down to three runners, Kipsang made his decisive move at the 37 km mark and held off former 5,000 metres world champion Kipchoge before pulling well clear in the final two kilometres on the fastest of the big city courses.