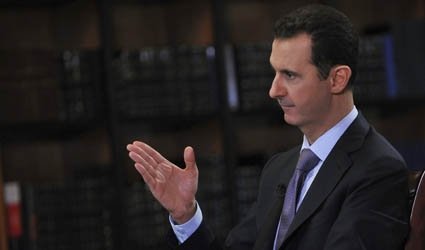 “We joined the international agreement against the acquisition and use of chemical weapons even before this resolution was passed,” he said when asked if Syria would comply with Friday’s U.N. resolution.

The U.N. Security Council adopted a resolution on Friday that demands the eradication of Syria’s chemical weapons but does not threaten automatic punitive action against Assad’s government if it does not comply.

“The central part of it is based on what we ourselves wanted. So it is not about a resolution, in reality it is our own intention,” he said, according to the Italian translation of his remarks.

“In 2003, the U.N. Security Council proposed liberating this entire region from these arms and declaring the Middle East a region free of chemical weapons. So it is obvious, we have to respect these conditions, it is part of our history,” he said. “We have to respect all treaties we sign.”

The U.S.-Russia deal averted punitive U.S. military action against Assad’s government, which Washington blamed for the August 21 sarin nerve gas attack on a Damascus suburb that killed hundreds. The Syrian government and its ally Russia blamed anti-government rebels for the attack.