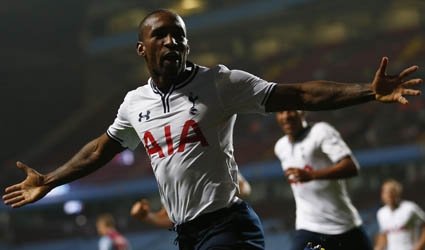 LONDON (Reuters) – With the abundance of flair and attacking talent Tottenham Hotspur acquired knowing Gareth Bale was leaving, it has perhaps been surprising that their impressive start to the season owes a lot to a watertight defence.

While the new boys have already given more than a glimpse of their talents, the men in white forming an impregnable wall at the back have gone quietly about their business.

Spurs, who host London rivals Chelsea at White Hart Lane in Saturday’s early kickoff (2:45 p.m. British time), are level on points at the top of the Premier League with neighbours Arsenal and have conceded one goal in nine games in all competitions this season.

That came in a 1-0 loss away to their local rivals on September 1 but, apart from that blip, goalkeeper Hugo Lloris and defenders Michael Dawson, Jan Vertonghen and Kyle Walker, along with Danny Rose and Kyle Naughton, have been rock steady.

Manager Andre Villas-Boas would dearly love a first victory over his former side since they sacked him in March last year and believes Spurs have hit the ground running.

“I think the team is playing very well, we have great strength in the squad, but I think, above all, great team spirit and ambition to do well,” he said after Spurs strolled to a 4-0 League Cup third-round win at Aston Villa on Tuesday.

Chelsea, who themselves have only conceded two league goals, won 4-2 at White Hart Lane last season with Juan Mata scoring twice, but the Spain midfielder has been out of favour since Jose Mourinho returned to take charge at Stamford Bridge.

Mata has been told by the Portuguese coach that he must improve his defensive work and appeared to have taken the advice on board in their 2-0 League Cup win at Swindon Town on Tuesday when he was afforded only his third start this season.

“If you look at his performance tonight, he made Fernando’s (Torres) chance early in the game, he was involved in the goal… then in injury time he conceded the final corner of the game supporting Ryan Bertrand in the left-back spot,” said assistant coach Steve Holland.

“We were pleased with Juan’s contribution, with and without the ball.”

Fourth-placed Chelsea’s win did come at a cost with midfielder Marco van Ginkel picking up a knee injury while Ramires suffered a muscle injury at the top of his thigh.

Leaders Arsenal, who on Wednesday extended their away record in all competitions to 11 successive wins with a League Cup success at West Bromwich Albion on penalties, visit Wales to take on Swansea City.

Arsenal, who along with Spurs have 12 points from five games but with a slightly better goal difference, will be without sidelined winger Theo Walcott who has an abdominal injury.

Champions Manchester United will try to bounce back from last weekend’s humiliating 4-1 drubbing by Manchester City when they host West Bromwich Albion on Saturday (1600).

United, who beat Liverpool 1-0 in the League Cup on Wednesday, are again likely to be without injured striker Robin van Persie.

The Dutchman has a mild groin strain and was not risked against Liverpool, with United manager David Moyes saying he had only an “outside chance” of featuring against West Brom.

Liverpool’s Uruguay striker Luis Suarez made his comeback on Wednesday from a 10-game ban for biting Chelsea’s Branislav Ivanovic and is set for his first league start since April when Brendan Rodgers’s team visit managerless Sunderland on Sunday (1700).

Suarez played for 90 minutes against United, looking a bit rusty but creating a few chances on his return to action.

Third-placed Manchester City travel south for Saturday’s match with Aston Villa (1600), who will be missing leading scorer Christian Benteke for four to six weeks with a hip injury.