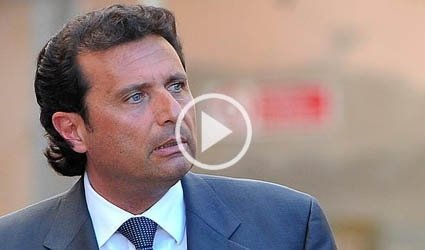 GROSSETO, Italy (Reuters) – Lawyers for the former ship’s captain charged over the sinking of the Costa Concordia cruise liner sought permission on Monday to examine the wreck for evidence, a week after salvage crews in Italy raised it off the rocks.

The raising of the Costa Concordia, one of the most complex shipwreck recoveries ever undertaken, has opened the way for a new quest for clues sought by prosecutors and the man charged with causing the accident, former captain Francesco Schettino.

“It is now possible to conduct an expert search for evidence on board the Concordia,” Francesco Pepe, one of Schettino’s legal team said as the trial in a converted theatre in the town of Grosseto resumed after the summer break.

Schettino faces multiple charges including manslaughter, causing a shipwreck and abandoning ship after the Concordia, carrying more than 4,000 passengers and crew, struck a reef off the Tuscan island of Giglio and capsized with the loss of 32 lives on January 13, 2012.

The 290-metre-long vessel, with a gross tonnage of 114,500 tonnes, now sits two thirds submerged on specially constructed platforms just off Giglio while salvage crews prepare for it to be towed away to be broken up next year.

Underwater robots have resumed the search for the missing bodies of two victims, but before engineers can start work on refloating the wreck, prosecutors want to examine it for more evidence about what happened on the night it sank.

The crushed and twisted side of the Concordia revealed the scale of damage to the ship’s structure when it was raised out of the water last week and it will be months before the hulk is stable enough to be towed away.

Schettino has admitted that he bears responsibility for the accident as the ship’s captain. But he says that he is not the only person to blame and wants the vessel to be examined for evidence of possible technical faults that may have contributed to the deaths of the 32 victims.

The call for a new search for evidence, following a formal request filed in July, was backed by other parties, including consumer group Codacons, which is a civil party to the case.

“Today there is a major section of the ship underwater, the main parts, but from what you can see above water and what you could see below water if you had the will to do so, I think it’s possible,” said Giuliano Leuzzi, a lawyer for Codacons.

Stripped of his maritime licence last week, Schettino is the only person on trial after four crew members and an official of the ship operator Costa Cruises were sentenced to terms of up to 34 months in prison after pleading guilty last year.

“The thing that is unjust is that there is only one person on trial, he does have his guilt but he should be here with a lot of other people,” said Michelina Soriano, a lawyer representing one group of passengers.

“We had plea bargains agreed for the other people on trial at a completely scandalous level, scandalous. Sentences that are completely insufficient,” she said.

Costa Cruises itself avoided criminal prosecution by agreeing to pay a 1 million euro ($1.35 million) fine last year but victims are seeking damages in a civil case.

Monday’s hearing was taken up by discussion of the responsibility of the ship’s Indonesian helmsman, and expert witnesses will also consider possible technical faults suffered by emergency generators and pumps.

Schettino told the court the helmsman failed to follow an order to steer left, causing a fatal 13-second delay as the ship approached the rocks. “The delay was the result of this mistake,” he said.

However, the chairman of the expert witness panel, Giuseppe Cavo Dragone, said any delay appeared to be irrelevant.

“The ship would have hit the rocks in any case,” he said.

The hearing is expected to continue for the rest of the week before going into recess.