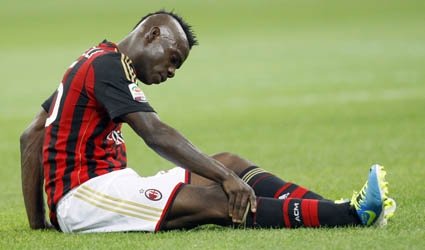 (Reuters) – AC Milan striker Mario Balotelli has been given a three-match ban for his sending-off at the end of Sunday’s 2-1 home defeat by Napoli, the Italian league said in a statement on Monday.

Balotelli, who missed a penalty and scored a late goal in the game, was given a second yellow card after the final whistle for arguing with match officials.

In addition to the automatic one-match ban, he was given an additional two games for “directing insulting and intimidating expressions to the referee at the time of the sending-off,” said the league in a statement.

AC Milan were also ordered to partially close the San Siro stadium for their next home game because of insulting chants by their fans aimed at Napoli supporters.

The disciplinary tribunals said the chanting “expressed discrimination based on their territorial origin”.