Málaga CF was again defeated tonight, this time against the all-powerful, reigning League champions, FC Barcelona. Tata Martino’s side took the lead just before half-time with a goal from Adriano. Bernd Schuster’s men deserved a draw in their debut match at La Rosaleda this season, with clear goal chances for Fabrice, Seba and Tissone.

Málaga CF didn’t waste any time on the attack in tonight’s game; two minutes into play and Tissone, making his debut at La Rosaleda tonight, launched a powerful shot at goal, sending the ball way over the crossbar.  The home fans were going wild in the stands in support of their team.  Song retaliated for Barcelona with a weak header that proved little danger for Caballero.

With Neymar on the bench, Tata Martino’s team soon took the reins of the match not long after kick-off.  Whilst the visitors were circling around the ‘Malaguista’ penalty area, they created numerous goal opportunities; in minute 17 a header from Cesc missed the target, and a good save from Willy stopped a Pedro goal seconds later.

Antunes attempted to surprise Víctor Valdés in the 27th minute following a free kick in front of the penalty area.  The ball went wide of the target and the Barça keeper forced a corner.

Willy prevented the best chance of the match so far for Barcelona to open the scoring.  In minute 36, the Málaga keeper recovered from a risky position to stop a shot at goal from Cesc.  The local fans again breathed a huge sigh of relief.

Bernd Schuster’s men had a chance to take the lead with a shot from Tissone from the left wing which set up a great ball for Sergi Darder, however the ball hit the far post.  The worst was yet to come for the Blue and Whites, and in minute 43, Adrian netted the ball into the target from the right corner of the penalty area, with Willy unable to prevent the visitors getting on the score board.

The second half got underway with another clear chance for Barça to increase their lead after 12 minutes.  A Piqué free kick, with his back turned to the left of the goal, set up a header that bounced off the crossbar.

Málaga’s biggest chance to equalise came in minute 67, thanks to an impressive performance from Santa Cruz following a pass from Eliseu.  The Paraguayan-born striker reached the goal line, made it passed Valdés and passed back to Fabrice.  He crashed through the Barcelona defence and launched a promising shot at goal, but the ball collided with the far post.  The Blue and Whites came so close to an equaliser, and stepped up the attack in their determination to score.

Barça tried their luck at a second goal with a shot by Neymar from directly in front of the penalty area, but again a fantastic save by Willy prevented the visitors sealing their victory.

In the last minute of play, Málaga CF had two chances to score.  A pass from Gámez on the right assisted in a great opportunity for Seba, but the ball played right into Valdés’ hands.  The clearance landed with Tissone who looked set to equalise with a powerful shot, but again the Barcelona keeper ensured his team kept their lead.  Neymar had another chance seconds later, but he sent the ball into the terraces.

Despite another defeat for Málaga CF, the Blue and Whites performed well against FC Barcelona, but still haven’t earned any League points so far this season. 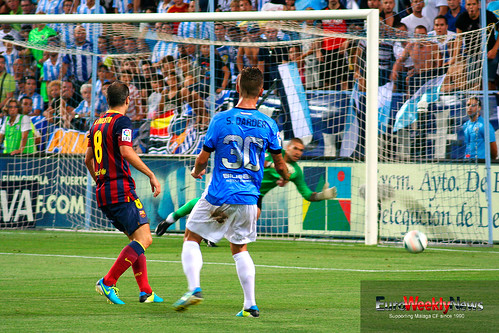