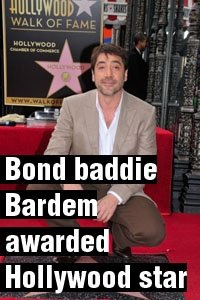 SPANISH actor Javier Bardem and wife Penelope Cruz have many things in common.

They are currently two of the biggest Spanish actresses in Hollywood. They both starred in 2008 romance film Vicky Cristina Barcelona. They are parents to 21-month-old boy Leonardo Encinas Bardem. And they each have their individual stars on the Hollywood Walk of Fame.

Currently wowing record cinema audiences in 007 movie Skyfall, Oscar-winning actor Bardem has been awarded this coveted honour, which is adjacent to his wife’s. Bardem, who plays villain Raoul Silva in the Bond film, was the first Spaniard to be nominated for an Academy Award and the first to win, for best supporting actor in the 2007 film No Country for Old Men.

Bardem was awarded his first English-speaking role in 2000 drama film Before Night Falls, and has since made his mark firmly on the big screen internationally.