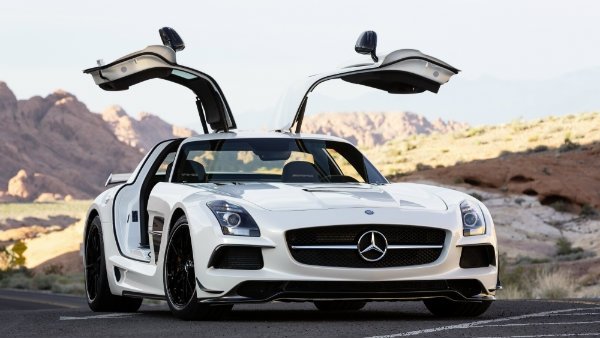 Inspired by the SLS AMG GT3 racing version, the fifth Black Series model from Mercedes-AMG boasts a fascinating mix of breath-taking design, outstanding driving dynamics and uncompromising lightweight construction. With a kerb weight of 1550 kilograms, the car has a power/weight ratio of 2.45 kg/hp. The AMG 6.3-litre V8 engine blasts out 631 hp at 7400 rpm and accelerates the most 100 km/h in 3.6 seconds.

The design of the series derives a special fascination from its similarity to the SLS AMG GT3 sport racing car. The gull-wing racing car developed in accordance with FIA GT3 rules has quickly become established as a serious contender among the super sports car elite.

A highlight among the optional equipment and appointments is the Bang & Olufsen BeoSound AMG high-end surround sound system.

“The new SLS AMG Coupé Black Series is a perfect study in the one hundred percent transfer of technology and engineering from motorsport to the road. We have drawn inspiration from the worldwide success of the SLS AMG GT3 customer sport racing car on both a conceptual and a technological level,” Chairman of Mercedes-AMG Ola Källenius said. “Boasting numerous lightweight components and fascinating driving dynamics, our fifth Black Series model guarantees pure, unadulterated ‘Driving Performance’. The SLS AMG Coupé Black Series is the ultimate choice for fast laps and highly emotional driving experiences”, he added.