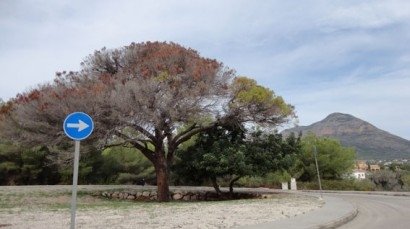 ONE of Javea’s most ancient trees,at least 1,000 years old, has died. Known as, ‘Pi Ver’ (Pine View), the tree is believed to have been strangled by the urbanisation which it gave its name.

Although a draft plan was produced to try and save the tree, its survival chances were virtually non-existent after its branches were continually damaged by trucks and an estimated 40 per cent of its roots were cut when building an access road around it. The Town Hall say they sent reports to the owners suggesting they prune the lower dead branches and offered advice and various measures for recuperation, which were ignored.