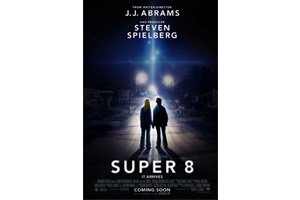 In the summer of 1979, a group of friends in a small town witness a catastrophic train crash while making a Super 8 movie and soon suspect that it was not an accident.

They find the wreck littered with strange white cubes, and when they approach the truck which caused the crash, they discover Dr. Woodward, their biology teacher, behind the wheel. He instructs them to never talk about what they saw; otherwise, they and their parents will be killed.

After being evacuated to a base outside the town, the kids are told that their friend Alice has been abducted by a strange creature. Joe, Charles, Cary, and Martin sneak back into town and search for information about the creature that might help them save . They discover that the government imprisoned an extraterrestrial who crashed on Earth in 1958.

The alien only wished to rebuild its ship, using the shapeshifting white cubes and return home, but was tortured by the Air Force, who sought to seize its technology. They discover that Dr Woodward was attacked by the alien, causing a telepathic bond, through which he learned that it only wanted to go home. Woodward derailed the train to free it from captivity.

They find the alien, and Joe manages to rescue , but, as they escape, the alien grabs Joe, who tells the creature that it can still live on even after painful events. The alien understands Joe’s meaning through their telepathic connection and allows them to escape.

If you liked ET and Stand By Me, you’ll probably like Super 8.