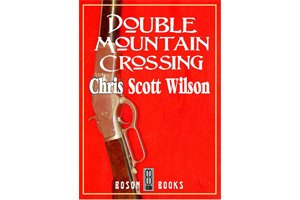 “With five westerns under my belt, it was exciting for me to visit Tabernas and the desert in Almeria where they shot the ‘Spaghetti westerns’ that made Clint Eastwood a star. Later, when I travelled to the real Old West of Arizona and Nevada, I realised what a great inspiration that trip to Mojacar and the old film sets had been,” says British author Chris Scott Wilson.

Boson Books of Raleigh, North Carolina, has signed Chris Scott Wilson to an exclusive contract for six books to be distributed world-wide as e-books. “We believe his westerns to be gritty and authentic,” a spokesman said. “There will always be a market for entertaining, well written stories, and with the advent of e-books it is now possible to reach everyone, wherever they are.

Wilson’s first reissue by Boson is Double Mountain Crossing. The plot? “Everybody thinks money is the answer to everything,” Chris Scott Wilson says with a half smile. “It isn’t. When Morgan Clay finds a mountain full of gold, he thinks his troubles are over. They’re not. They’re only just beginning. Indians. Card sharps. Gunslingers. Women…” Double Mountain Crossing is followed by The Fight at Hueco Tanks, The Quantro Story, The Copper City, and Desperadoes. The sixth e-book will be a maritime yarn, Scarborough Fair. It is a fictionalized account, based on fact, of the lead up to, and the actual sea battle when John Paul Jones became America’s first naval hero at Flamborough Head during the American War of Independence.