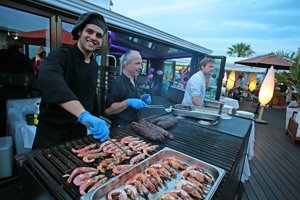 THE annual party to celebrate the official birthday of the British monarch, Her Majesty Queen Elizabeth II, went off in style on Saturday night at Mood Beach in Costa D’en Blanes. The party, now in its third year, was hosted by Margaret Whittaker OBE, and the British Consul Mr Paul Abrey. Around 100 people attended representing a variety of charitable associations around the island.