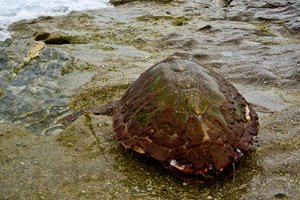 Whilst out to lunch today on Mojacar Playa a suspicious floating object was observed about 10m of the beach just outside the Beachcomber Cafe. Expatriate Dean Baker had some binoculars in his car so he rushed to get them to see what it was bobbing up and down just beyond the surf.

“I could not tell if the poor creature was still alive,” he said. “So I hopped over the wall and followed it further down the beach until the waves washed it upon some rocks approximately 50m along the beach from the Irish Rover.

“As I drew closer it was apparent the turtle was dead. “