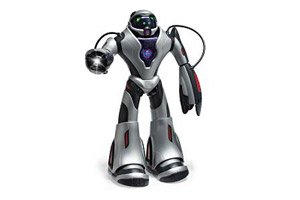 THE walking, talking, dancing, game-playing Voice-Activated Toy Robot also scans the room for intruders while you are away. It can respond to 20 pre-programmed voice commands and detects and avoids obstacles with its infrared sensors. It can perfectly repeat a tapped out rhythm of up to 200 beats with an impromptu dance.

If challenged to a duel with an infrared television remote control, he will act out a lighthearted ‘death’ scene when shot.

He also comes with an interactive game of ‘Simon Says’, which might more aptly be called ‘Simon Cowell says’ since he will then comment on your skills, or lack of them.