The First Deputy Mayor of Vélez-Málaga and Councillor for Tourism, Jesús Pérez Atencia, has met with Marta Sango the singer from Torre del Mar who hopes to represent Spain at the next Eurovision song contest. The event takes place in Turin, Italy, on May 14.

Pérez Atencia speaking to local media said: “we summoned the media to show all our support for the Torreña singer Marta Sango, who will participate in the Benidorm Song Festival on January 26 and 27. The Spanish representative for Eurovision will be chosen at this event, so it is an excellent platform for the career of our countrywoman in the music world.”

Benidorm will host the two semi-finals and the grand final of the Spanish contest to choose the country’s representative. The two semi-finals are scheduled for January 26 and 27, with seven artists due to participate. Four of these will be chosen go on to the final on Saturday January 29. Among them the torreña Marta Sango.

Sango will sing her retro pop song ‘You are still in my mind’, a song with an eighties feel. The song is similar to those that will be included in her new album due for release in the spring.

Atencia has called for everyone to show their support and to vote for Sango so that she can go onto to represent Spain. Sango thanked the mayor’s office for their support and said: “I am proud to be from Velez-Malaga.”

Spain’s highways to cost one trillion

News
Back in 2013 then Minister of Development Ana Pastor said that the solution for the development, maintenance and control of the highways will not... 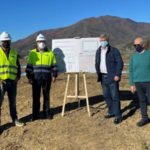