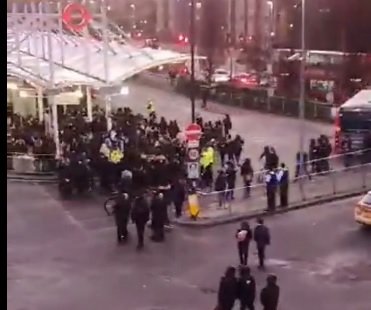 Police had to disperse a 200 strong school fight in Edmonton Green on Wednesday after calls from local residents. The fight, which took police more than three hours to bring to an end, saw youngsters arrive with knives and bleach.

A police helicopter was also despatched to the scene where pupils from a number of schools from the area, came together to join in the fight that took place at the Edmonton Green bus station.

Despite the presence of weapons no serious injuries were reported.

Enfield Borough Commander Treena Fleming said: “The incident was reported to police by various members of the public who stated that there were approximately 200 secondary school children fighting amongst each other in the bus station.

“In order to disperse the crowds we were supported by the National Police Air Service (NPAS) who positioned their helicopter above the crowd, providing aerial support to our colleagues on the ground.

“In addition to this, officers were assisted by Enfield Council CCTV who continued to monitor the local area both during and after the incident.

“Due to the combined efforts of CCTV operatives, NPAS and local officers the crowds were dispersed by 1854h with no significant injuries reported.

“I appreciate and recognise the concerns of the local residents in the area and would like to reassure you that an investigation is ongoing to identify those responsible for last night’s disorder.”

Since the incident more officers have been put on patrol and a dispersal order is in place.

A spokesman for North Star Community Trust, who run nearby Heron Hall Academy, declined to say whether any disciplinary action had been taken against their pupils.

He said: “We are aware of reports of students from a number of different schools in the borough taking part in a fight at the local bus station.

“The bus station is a key transport hub for many schools in Edmonton.

“Along with the other schools in the area we are investigating to see if any of our students may have been involved or were simply at the bus station at the time.”

The school fight reminiscint of the bad days in football, is being investigated by both police and the schools in the area in an effort to understand who organised the 200 strong fight and who was involved.