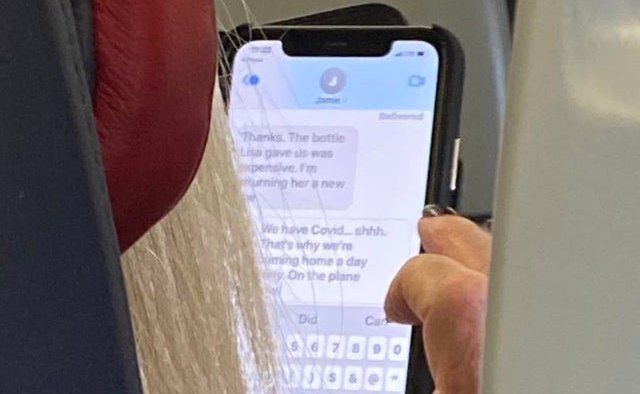 A woman on a plane posted a photo of a fellow passenger texting a friend that not only did they have COVID, but they were tavelling home a day EARLY.

A passenger travelling on American Airlines was unpleasantly surprised to catch the person sitting in front of her texting a friend to say that she knowingly had COVID and had decided to get on the plane home anyway. The woman spied the text through the crack between seats.

The photo was shared on Reddit with the caption: “Is this even legal?”. In the photo, the blonde-haired woman is wearing a leopard-print top as she writes the message on her iPhone with manicured nails.

The text, sent to someone called Jamie or James, says: “We have Covid… shhh. That’s why we’re returning home a day early. On the plane…”. The “we” indicates that she was flying with at least one other person.

The Reddit user who shared the photo was evidently annoyed but did not state whether she had made any actual complaints.

Many people commented on the Reddit post to express their shock that the woman would take the decision to put others at risk and fly instead of quarantining.

“SUPER f*** people who KNOW they have covid that don’t take precautions to keep other people safe from it,” commented one user.

“F*** that lady, expose her to the flight attendant. See something, say somethin,” wrote another.

“That’s when you say loudly to her “Wait… You have COVID??” and let the others around her know. Watch her squirm,” said another.

However, some people argued that the passenger should have minded her own business, calling her a “weirdo” and an “a**hole”.

“Why are you reading other people’s text messages like it’s your business? You don’t even know if they’re joking or not. OP is just being a creep, I hate people like you,” said one user.

“The trashy part is reading someone’s text messages, whatever the information they contain may be,” wrote another.

In December, a similar incident occurred on a flight between Chicago and Reykjavik, when a woman tested positive mid-flight. This time, however, she acted responsibly by informing the flight attendants and quarantining in the bathroom.

Axarquía - Costa Tropical
Rincón de la Victoria Mayor, Francisco Salado, announced on Saturday, January 15th that the Boquerón de Plata for 2022 will be awarded to the...