Britney Spears has posted nude photographs of herself to her followers on Instagram as she celebrates finally being free from her toxic conservatorship. The singer stripped naked – bar a pair of white knee-high socks and a choker – for her latest social media post. 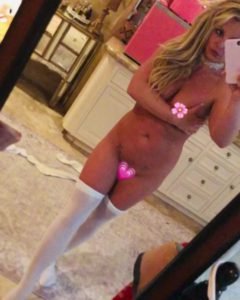 The commenting function was turned off for the post, which racked up 750,000 likes in just one hour from the fans of the singer. The post came after the landmark ruling in her conservatorship case that means her father Jamie Spears is no longer in charge of her personal and financial decisions.

The entertainer has used her newly found freedom to speak out against the non-consensual agreement that forced her under the watchful eye of her family for over a decade. She often also shares videos of her singing and dancing at home.

Britney Spears also recently revealed that her hiatus from music is to annoy her family after she was made to work during the 13-year conservatorship. The star wrote in a lengthy post in December that she was ‘screaming inside’ when she was told that she couldn’t perform new songs and remixes of her older tracks – even though her sister Jamie-Lynn WAS allowed to do so.

Britney explained: “So much wasted time to only embarrass me and humiliate me and I guess it seems odd to most now why I don’t even do my music anymore… that’s just the surface issues. People have no idea the awful things that were done to me personally… and after what I’ve been through, I’m scared of people and the business!!!!

“They really hurt me!!!!!! Not doing my music anymore is my way of saying “F**k You” in a sense when it only actually benefits my family by ignoring my real work… It’s like I’ve subconsciously let them win…”

Putin, North Korea, Covid and the Doomsday Clock – is Armageddon upon us?

World News
Armageddon - The Doomsday Clock is at 100 seconds to midnight amid tensions between Putin and Ukraine, weapons testing in North Korea, the Covid...

Axarquía - Costa Tropical
Rincón de la Victoria Mayor, Francisco Salado, announced on Saturday, January 15th that the Boquerón de Plata for 2022 will be awarded to the...