Furious demonstrators march through the streets of Vienna


According to Austrian police sources, an estimated 44,000 demonstrators took to the streets of Vienna today, Saturday, December 11, to protest against coronavirus measures in the country. The Austrian government has plans to introduce mandatory vaccinations in February, with unvaccinated people set to face further restrictions and fines in the new year.

Unvaccinated citizens in Austria have been confined to their homes, while a partial confinement of fully vaccinated that was in place, will end tomorrow, Sunday 12.

Protestors filled the streets of the capital, some holding aloft placards reading “No to vaccine fascism”, and others that said, “I’m not a neo-Nazi or a hooligan”, as well as, “I’m fighting for freedom and against the vaccine”.

Under the new measures, the government says that no citizens can be forced to take the vaccine. Instead, anybody who refuses can face the first fine of €600 euros (£510). Subsequently, every three months this amount will increase to €3,600 euros (£3,070), with the size of the fine being calculated depending on a person’s financial situation.

Austria currently has one of the lowest vaccination rates in western Europe, with around 68 per cent of its population fully jabbed. Last Thursday 9, the government announced its plans for mandatory jabs.

Karoline Edtstadler, the Cabinet minister responsible for constitutional issues, said, “We still have an obligation, and a need to increase vaccination coverage, so that we don’t go from lockdown to lockdown next year as well. While Wolfgang Mueckstein, Austria’s health minister, commented, “There are still well over a million Austrians who aren’t vaccinated. That is too many”.

Adding, “I say very clearly that we don’t want to punish the people who aren’t vaccinated. We want to bring them along, we want to convince them of this vaccination and we want them to show solidarity with everyone so that we can regain our freedom”, as reported by dailymail.co.uk.

More footage from the protest in Vienna, Austria. pic.twitter.com/qm74YBrPP0

Over 44,000 have taken to the streets in Vienna, Austria to protest against medical segregation and lockdown for the unvaccinated.pic.twitter.com/K6SwuEX0oh 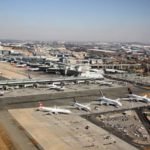 Flights resume between Europe and south of Africa

EU News
Flights between Europe and seven countries in the south of Africa are to resume after being suspended due to the omicron variant.The members of...