Will Smith turns from The Prince of Bel-Air into the King of tennis in this story of how the Williams sisters came to dominate the sport.

Legendary actor, film producer and rapper Will Smith (Men in Black) plays Richard Williams in this biographical drama about how Venus and Serena Williams became two of the most well-known tennis players in the world. With a 91 per cent critic rating and 98 per cent audience rating on Rotten Tomatoes, this film is definitely worth a watch even if you’re not a tennis fan.

A story of true grit and determination when it seems like all the odds are against this family from Compton, USA, King Richard gives viewers a look into how Venus, played by Saniyya Sidney (Hidden Figures), and Serena, played by Demi Singleton (Goldie), Williams’ father coached them to the top of the tennis world. 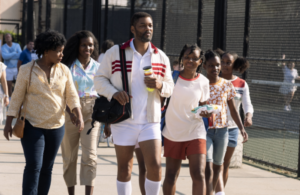 The story intertwines race, family and poverty issues focusing on the unconventional and outspoken father of tennis as the Williams family band together to help the sisters live out their sporting dreams. Richard will tell anyone who will listen, and even those who don’t want to listen, that his daughters are born to be stars and that he has an 84-page plan to achieve it.

This is a feel-good film with great acting (it’s Will Smith – need I say more?), although, it’s questionable how true to reality the movie is in its depiction of Richard Williams. Richard’s estranged family have since hit back at the film, claiming it is not a realistic portrayal of their father and that the movie only tells half of the story.

Despite this, King Richard is an entertaining, motivational and humorous movie about never giving up.

It’s also worth watching the end credits which feature real footage of the Williams sisters and their father. From camcorder footage to TV broadcasts, the credits show a summary of the accomplishments that the Williams’ achieved and also shows how well Will Smith played the role.

The movie can be streamed on HBO Max.

World News
Baby box: People can ‘safely’ abandon their babies. A baby box is set to be installed in New Mexico after a new mum tossed...