BY September 30 this year reported gender violence in Alicante province increased by 14 per cent on 2020.

The number of offences where the victim was a woman rose by 24 per cent, according to national statistics.

The calls that Alicante province women made to helplines were also 100 points above the national average.

These latest figures were released as the Costa Blanca – and all of Spain – commemorated International Day for the Elimination of Violence against Women on November 25.

They also revealed that the Valencian Community, with a total of 5,656 official complaints of gender violence, has the third-highest incidence in Spain after Andalucia and Madrid.

Proportionately, the Valencian region has a gender abuse rate of 21.8 for every 10,000 women, more than five points above the national average of 16.6 per 10,000 women and exceeded only by Baleares’ 25.7 victims. 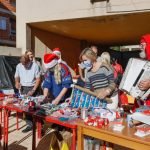 News
The National Trust has warned that the countryside is undergoing “dramatic change” due to climate change. The warning comes with the news that 30000...