Twelve people were injured in a devastating house fire in Alicante.

The fire destroyed the house on Calle Poeta Sansano, Alicante.

Alicante Fire and Rescue Services were called to the blaze at around 8.25 pm last night (November 23) after being alerted to a fire that had broken out in a ground floor flat in a three-storey building.

According to fire brigade sources, it was actually the tenants themselves who discovered the fire when they entered the house. When they returned home the fire was raging in one of the rooms so they immediately alerted the emergency services. 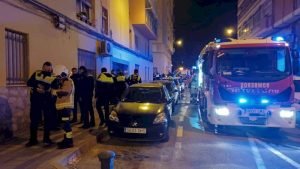 Firefighters, Alicante Local Police and ambulance staff arrived on the scene to find that people were still in the building. Ten firefighters were divided into two teams to attack the flames that were spreading very quickly throughout the building.

The firefighters found three rooms badly affected but were able to extinguish the fire quickly. However, the smoke and flames were so bad that the people still inside had to be treated by medical staff when they were finally rescued.

In total, twelve people were checked by medical staff, with seven residents treated by staff at the scene including three children, whilst the rest had to be taken to hospital, including a mother and her child.

Firefighters tackled the blaze for more than an hour, and the house was completely destroyed by the flames.

The cause of the fire is not yet known.

Jail for man who tried to kill lottery-winning partner

UK
Jail for man who tried to kill lottery-winning partner. The lottery winner was left lying in a pool of her own blood after being...