the art of publishing
More
Home Sport When it rains, it pours: everything is going wrong for FC Barcelona
Facebook
Twitter
ReddIt
WhatsApp
Telegram
Linkedin
Email

It is widely accepted that European soccer is the best throughout the world. If you are the best European side, then odds on you are also by default the best side on the planet at the same time. In the last thirty years, we have seen a number of European sides go on impressive winning runs, where they not only dominated their domestic league, but also the international competitions, aka the Champions League. One of the greatest examples of this has to be FC Barcelona.

Between 2005 and 2019, they won the Spanish La Liga title ten times. They also picked up six Copa del Rey trophies, eight Supercopa de Espana, and most importantly of all, four Champions Leagues. Under Frank Rijkaard, Pep Guardiola and Luis Enrique, the Catalan side managed to find ways not only to win, but to do it with a certain style, playing beautifully attractive football, that made them the envy of clubs all around the world. It honestly appeared that their time in the sun would last forever.

However, as we all know, sport is like life, in that it moves in cycles. At some point, the good times come to and end, and the trophies stop being added to the cabinet. This has happened to Barcelona big time in the past two seasons, as they’ve gone from perennial title challengers, to struggling in mid-table. They used to be a favourite for fans looking for winning betting odds, but now they are so unreliable that they tend to steer clear of them. How has it come to this, that they’ve started the season this poorly? Not only in La Liga, but in the Champions League as well? Let’s look at their results so far in the competition, and find out what some of the main contributing factors have been that have caused this rapid decline. 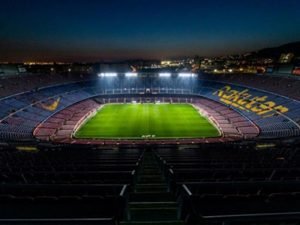 FC Barcelona haven’t started a Champions League campaign this poorly since 1997. That year, they only won one of their six games, losing three and drawing two. Will this year be just as bad? Given the first two games, this possibility appears to be getting more and more likely.

In their first game, they welcomed Bayern Munich to the Camp Nou. Bayern and Barcelona have had some classic encounters down the years, with most having been fairly even. However, it was obvious that the power had shifted towards Germany in recent years, as in the 2020 Champions League semi-final, Bayern destroyed Barcelona, with the final score 8-2 to the side from Munich. So it was expected that Bayern would be in a stronger position going into this game.

While the score wasn’t quite so ridiculous, it was still a resounding 3-0 win to Bayern. It really should have been more, but it got to a point where it seemed like the German side took their foot off the gas, and almost stopped trying. Try as they might, Barcelona could not get into the game, and never really looked like scoring. It was humiliating for the Spanish side, with their fans showing their frustration at the end of the game.

While Barcelona were expected to struggle in game week one, their second fixture against Benfica looked to be easier, at least on paper. However, within three minutes the Spanish side were behind, and would concede twice more before the end of the game, to suffer their second straight 3-0 loss in the Champions League. Matters were made even worse when defender Eric Garcia received a red card in the closing stages. Two games, six goals conceded, zero goals scored and zero points. Things are looking very bad indeed for the Catalan side.

Why is this happening?

One of the main reasons for Barcelona’s drastic dip in form has to be because of the loss of Lionel Messi. Arguably the greatest player of all time, for nearly 17 years everything Messi had touched turned to gold. He had scored 672 goals in 778 games, as well as 266 assists. The team was built around him, which meant that eventually they became overly reliant on the Argentinian to produce some magic. He wanted to stay at the club, but due to their dire financial situation, they had to let him go.

Another contributing factor is the very poor transfer business that has been conducted in the past few years, bringing in players for huge fees, on massive wages, who have underperformed. Philippe Coutinho, Ousmane Dembele, Antoine Griezmann and Miralem Pjanic are all examples of players who were brought in, but have contributed very little to the side. It remains to be seen if any of them have a future at the club.

The financial difficulties off the pitch are also playing a huge part in the downfall of Barcelona, as they struggle with huge debts. This could impact them for years, meaning it might be some time before we see them perform to their previous standards in La Liga. This means they might not even make it into the Champions League next year, something that would have previously been unthinkable.