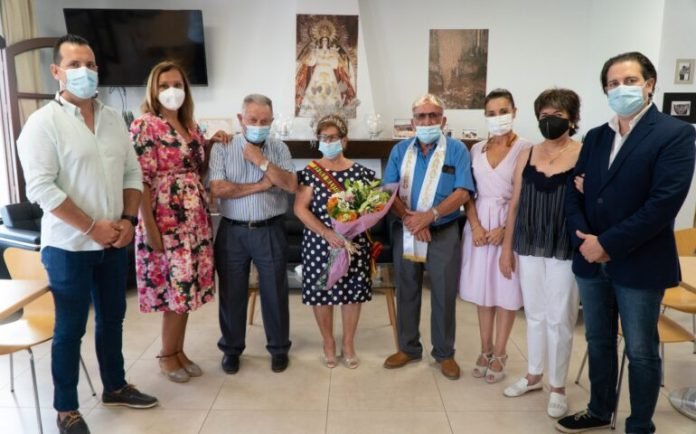 The Home and Social Centre of Maro hosted the coronation of the Queen and the Knight of the Third Age of the Festival of Our Lady of Wonders, patron saint of the Mareños and the Mareñas on September 7.

This year the crowned have been Manuela Alvarez Diaz and Jose Muñoz Muñoz, who have been elected by the members of the Maro Celebration Board.

The first deputy mayor, Francisco Arce, accompanied by the mayor, Encarnacion Moreno, the councillor for Fiesta, Elena Galvez, the councillor for Tourism, Gema Garcia, the councillor for Commerce, Javier Lopez, representing the Board of Celebrations, and the president of the Marocueva elders’ association, Placido Portillo, have been in charge of the delivery of the bands, crowns and recognitions.

Francisco Arce has congratulated the crowned, highlighting that “to meet again with the elders of Maro in their Home and Social Centre, recovering one of the important traditions of the Fair of Wonders, such as the coronation of the Queen and the Knight of the Third Age, is a joy for us, since it means that the health situation is allowing the celebration, with precautions”.

The mayor expressed he is hopeful that next year the people of Mareños and Mareñas can once again celebrate their patron saint festivities with total normality.

The scheduled events have continued with the first of two Masses in honour of Our Lady of Wonders in the Church that bears her name, during which an offering was made in the form of non-perishable food that will go to Caritas Nerja.

Today, September 8, the second mass will be celebrated at 6.30pm, which will be enlivened with a performance by the Rumba 2000 group from Mare.