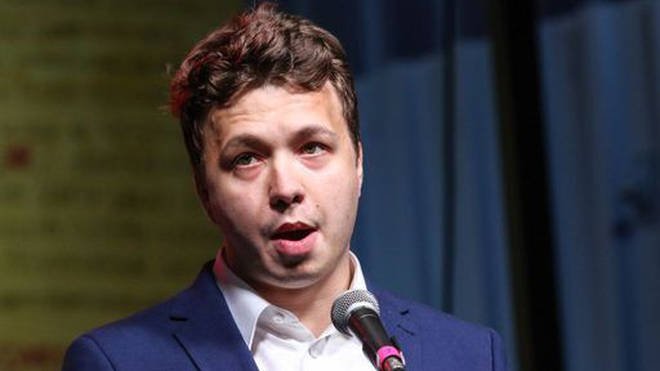 A dissident journalist who was dragged off a Ryanair passenger jet and arrested by the Belarusian regime in an extraordinary ‘war-like’ hijacking on Sunday has appeared on state TV tonight, Monday, May 24, ‘confessing’ to charges of organising protests and is cooperating with authorities.

“This is how Raman looks under physical and moral pressure. I demand the immediate release of Raman and all political prisoners,” a leader of Belarusian opposition, Sviatlana Thiskanouskaya, wrote on Twitter in English, using the Belarusian spelling of his name.

Appearing on several channels of the Telegram messaging app, Protasevich, wearing a dark sweatshirt and with his hands tightly clasped in front of him, says he is in a pre-trial detention facility in Minsk and denies having heart problems reported by some social media- he also appears to have a small black spot on his forehead.

Belarusian President Alexander Lukashenko, 66, has faced the biggest challenge of his nearly 27-year-old rule from protesters who took to the streets after he was declared the winner of an election last year they said was rigged.

Since then, around 35,000 people have been detained- Lukashenko denies electoral fraud and has accused the West of sponsoring the protests. Tensions between Lukashenko and the EU are rising again after reports of police violence in protests last year.

It comes after a Russian-made MiG-29 fighter jet allegedly threatened to blast a Ryanair plane carrying 123 passengers out of the sky as part of a plot to arrest an anti-regime blogger.

It is claimed the air force pilot had been given “permission to shoot” as suspicions mount over the role of a group of mystery Russians aboard the aircraft. The mystery Russians voluntarily left the plane in Minsk and did not continue with the flight when it flew on to its destination Vilnius.

Their presence stoked fears of Russian secret service involvement in a murky operation to arrest opposition journalist Protasevich, 26, who was detained with his girlfriend Sofia Sapega, 23, after the emergency landing.


Russian President Vladimir Putin has supported the Belarusian regime led by his dictator pal Alexander Lukashenko, who is accused of rigging an election in August. The pretext for forcing the plane to land was a bomb threat, however, after a thorough search, no explosive was found by the Belarus authorities.