Brit Chris Levelle turns what started as a “bit of a laugh” into hundreds of euros for Covid-hit families in Benidorm.

CHRIS took on the #300milechallenge around the popular Costa Blanca resort for a bit of fun, but it quickly became a mission to raise as much money as possible for Benidorm Food Bank while getting fit in the process.

Back in February, Chris decided to get fitter and healthier “by doing exercise every day”, so he set himself a “new challenge alongside the walking” and pledged to walk 300 miles (480 km) by the end of March.

“It started as a bit of a laugh at first, but then I decided to do it for the #benidormfoodbank which made it more of a challenge to not fail,” he said.

“I personally have benefited also by losing a surprising 2lb short of 2 stone… it might not be a lot to some, but it certainly is for me! Well worth the effort,” said Chris, who moved to Benidorm last July.

As well as losing weight, Chris raised €425, which he said he is “delighted with”.

“I’m very sure that Heidi Galvin (of Benidorm Food Bank) will do wonders with that and provide much-needed food for the local people of Benidorm which have been and continue to struggle to put a meal on the table!! 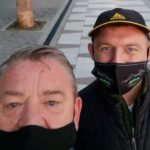 “So now is the time to go round collecting the pledges from the amazing people who also donated. And I would like to thank some individuals who took time out of their day to join me on some of the walk: Colin James; Mercedes Lucy Wesley and pooches; Stuart Riggans; Frankie Vernon Gallagher.

“But really big thanks to my main walking partner Anton Mcinnes who helped with the motivation in the very early miles. Cheers Anton they were some funny chats and discussions we had, sad that you’re not still here mate…come back soon.” 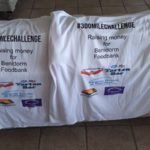 But that’s not the end of Chris’ physical efforts.

“I’m still carrying on doing the same walk daily on the #whitepathwalk so if you’d like to join in then please feel free!”

“An absolutely amazing achievement. Here at Viva la Benidorm we are very grateful and also very happy to have supported you on this conquest, Keep it up my friend x” wrote one fan.

Benidorm’s British Business Association Food Bank was set up by Heidi Galvin and other members in March 2020 to help those struggling to “feed their families or pay their bills” as a result of the pandemic.

On hearing of Chris’s success, Heidi posted: “Fantastic thank you so much xx”